I Was Buried Under Dead Pilgrims, But Officials Saw My Head Moving- Hajj Survivor Narrates Ordeal 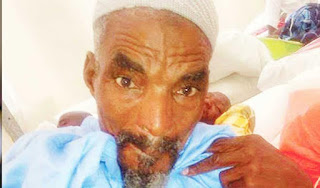 Malam Umar Mohammed Umara, an aged Nigerian pilgrim from Kebbi State has narrated how he luckily survived the Mina stampede that claimed about 717, injuring at least 805 others in a massive crush while the victims were on their way to stoning the Devil.

Narrating his ordeal to some news correspondent in his Kebbi State Pilgrims camp in Mina, the 68-year-old man, from Argungu local government area, said he was practically buried under bodies that were crushed during the stampede for over six hours, but was lucky that his head was spared while his torso suffered different assaults.

“I was so weak and exhausted from the long trek from Muzdalifa when we ran into an Arab man whose wheelchair was caught up in the crowd coming from the opposite direction,” Umara narrated.

“Pilgrims started crushing. each other while some who were stronger used us as ladder to scale through fences of the Arab tents on both sides of the road,” he added. “Many pilgrims were crushed and Killed on top of me, but God spared my life when security agents and rescuers were evacuating dead bodies found my head moving.”

He said: “I have severe pains on my chest, arms and I was bitten by an Arab man who struggled to scale over a fence in his fight for survival. Unfortunately, he was crushed alongside many pilgrims right on top of my chest. I’m still in pain and still have not eaten.”
Umara said: “I saw dead bodies of many Africans littered around. I thank God for being among the survivors. I was rescued with all my clothes ruined and my money missing. My friend gave me what I’m currently wearing.”

Many Africans were feared crushed including two Nigerians a professor and Bilkisu Yusuf, a veteran female journalist.