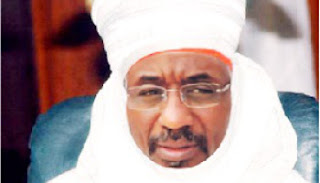 Reports have confirmed that former CBN Governor, now Emir of Kano, Muhammadu Sanusi Lamido
II, has finally added to his haram by tying the knot with his
rumoured heartthrob, Sa’adatu Barkindo-Musdafa, the daughter of
Lamido of Adamawa, Muhammadu Barkindo-Musdafa a 18 year old Princess

This addition to the household of the Emir makes Princess Sa'adatu the fourth wife of Sanusi.
His first wife Sadiya is the daughter of the late emir of Kano, and his other wives are Maryam and Rakiya.

According to PREMIUM TIMES, the secret wedding was contracted in a
low-keyed ceremony in the town of
Yola on Friday.
Meanwhile, the relationship and allegiance which had been rumoured before was debunked and denied by the parties involved.
Palace sources in Yola said the
wedding fatiha held inside Lamido’s
palace minutes after Jumma’at prayers.

Inside sources claim that the Emir sent out invites to only important dignitaries across the country, as Kano government
officials sneaked into Yola for the
wedding fatiha to avoid journalists.

The Kano State governor Abdullahi
Ganduje was said to have acted as the
guardian for the groom, while his
Adamawa counterpart, Jibrilla Bindow,
played the role of the bride’s guardian,
who gave her hands out in marriage to
the monarch.