Wait, Ooni Of IFE's New Bride Has Been Married Twice? Read All The Gist Now! 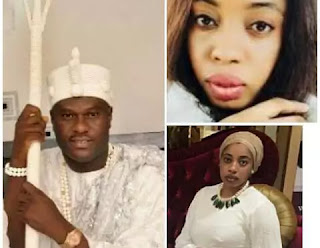 Its no longer news that the Ooni of Ife, Oba Adeyeye Enitan Ogunwusi is taking a new wife, Sonia Itohan Wuraola Otiti, tomorrow, Saturday, but what is news according to reports flying around is that Wuraola also known as Sonia had been married twice before now.

The news according to some onlune reports rebealed that Sonia is a UNIBEN dropout and she is still legally married to a Lebanese billionaire, Eli Khoury, in Dubai the  reports allege – Her change of name from Sonia Obahan to Wuraola Otiti is so that her former failed marriages can be covered
Sonia was once married to former Jigawa state governor, Saminu Turaki There are reports that Sonia (or Wuraola Otiti) who is the incoming ‘ayaba’ is pregnant and all the news flying around about her has fallen on the deaf ears of the love-struck king.
Sonia was said to have been married to former Jigawa state governor, Saminu Turaki. Her marriage to the former governor when she got pregnant while Turaki was battling with impotency. She later gave birth to twins who died at birth.
The incoming ayaba was said to have allegedly had a love affair with former deputy senate majority leader, Abdul Ningi. The love affair allegedly crashed over infidelity. The alleged University of Benin dropout is still legally married to Lebanese billionaire, Eli Khoury.
Have you wondered why the beautiful woman who is in her 30s has ni social media account? I did wonder… but if these reports are anything to go by, it is an indication that the lady who according to sources once flaunted her marriage to  her Billionaire hubby Eli Khoury on her social media account probably deleted all of her accounts.


- March 11, 2016
Email ThisBlogThis!Share to TwitterShare to FacebookShare to Pinterest