Yoruba Movie 'Metomi' - The True And The Untrue! (Review) 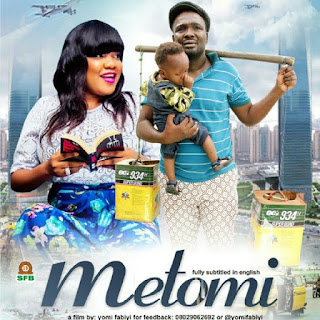 So last week, I stumbled on my family sitting glued to our TV set watching a Yoruba movie. one of my elder brothers who came visiting was watching too. I sat with the family and in no time, my mum had aptly narrated the movie so I could catch up.
The movie; METOMI a movie produced by Yomi Fabiyi. I watched the movie and I found myself thinking, this guy is good….

I haven’t seen any Nollywood movie In a while, so permit me to talk about this one I saw. This is a freestyle review anyway.
Whatever this review says, this story is one of the realest I've seen in a while.
The Movie: Metomi
A young Nigerian man Metomi (Yomi Fabiyi) met and fell in love with a Ghanaian lady Anuwa (Toyin Aimakhu) at the NYSC orientation camp, after service, Anuwa decided not to return to Ghana. She stayed back and married Metomi.

In no time, they were blessed with a son. Metomi lost his job, couldn’t secure another, consequently, there was trouble in the name of poverty.

Meanwhile, a guy Dele had a problem; anger. At the slightest provocation, he would beat his staff or his fiancé senseless. He ended up having no one around him, they couldn’t stand his anger. He sought the help of a psychologist (Kemi Afolabi) who was Anuwa and Metomi's friend in camp.
The psychologist promised to help him…

Dele fell in love with Anuwa and began to court her.
Kemi Afolabi encouraged Anuwa to allow Dele who was quite rich.
Metomi's joblessness had turned to helplessness.
Anuwa lied to her husband that she needed to visit her family in Ghana, she left his little son with Metomi and went to Dele.
After waiting for her, Metomi went in search of Anuwa only to be told she had never returned to Ghana.

Metomi brought his mum (Bulky Ajayi) to take care of his son but she died in his home shortly after she arrived.
Metomi began to sell water, on the line of duty, he got employed as a security man in the same house Dele lived with his wife Anuwa!
He begged her to let him stay after promising he was no threat to her marriage.

OK, somehow, Metomi couldn’t keep the job, Anuwa sent him away for bringing their son to work one day.

He tried to kill himself and his son but failed, there he met Two publishers who after listening to his story decided it was worth writing and publishing. It was written, published and it became an instant success, a bestseller. The Minder.

He became successful. Everyone read his story, and every reader cried including Dele, Anuwa's husband who made his wife read it too. Dele knew it was Metomi's story and he tried to contact Metomi ‘Metgor’ to no avail. One day, in the heat of his anger he tried to hit Anuwa after confronting her with the story. In the tussle, Dele died, Anuwa became a prisoner, Metomi became famous, married another wife and there, it ended.

Ooops! That was long, sorry.

I think Mr. Yomi Fabiyi did a superb job. Nice story I must say, its often popular to weave suffering around women in Nigeria, this time however we see things for how they can really be, a man can also be caught in that web as was portrayed in Metomi’s case.
Dele (who’s that guy) did a good job with his role, he was one of the people I liked in that movie.

The movie moved smoothly from the beginning nicely into the conflicts of the plot but I must say that I wasn’t too pleases with the resolution.

Metomi met with publishers and they decided to write his story… with my calculations, the story was written, edited, published and distributed in less than two months!

How did I arrive here? Simple. Anuwa's son, He didn’t grow. From my experience as a writer, I can tell you that a feat like that cannot be achieved in that little time. Writing a complete novel takes time, I won’t say years, but really, it could take years…

There should have been an allowance for time, the baby should have been allowed to grow so as to depict the passage of time and even allow Metomi's supposed ‘suffering’ to be justified.
(Metomi even married another wife in that little time!)
Nursing a baby from cradle to a reasonable level of growth. Then, we can say, he tried.

Again, it would explain the tears on the face of every reader. The developing years of that baby would have been challenging for a poor man even without being told.

In the absence of this, I’m forced to ask what made readers cry in that novel: Anuwa's cruelty to Metomi?
His mother's death?
His attempted suicide?
What?
(If that could make them cry endlessly, then my story would be unreadable as there was would be tears from the first page)

What I am saying is: we didn’t see enough. This could have been corrected with the growth of that baby, naturally, we would understand that water had passed under the bridge

What else did I see?

Reading habit in Nigeria not portrayed…
Ah, if there was one thing that got me laughing in the movie despite its somber mood, it was the rush for the novel. We saw different categories of people even trailer drivers buying the novel. In Nigeria? No way. Nigerians are not readers. If it had been a movie, fine, but a novel, no. No. That was farfetched. Probably should have been a home video after all, I understand a movie can be shot in three months. Nigerians love movies but novels, I insist, no.

Haba, you ask a student if he could recite his school anthem, he says yes and you say “I’m blushing”… I’ll just say  ‘wrong expression' that was nothing to blush about if you ask me.

Do Ghanaians now come to Nigeria for NYSC? Full Ghanaians who didn’t even school in Nigeria? Maybe they do, or maybe Anuwa schooled in Nigeria, but nothing in the movie depicted it.

If ‘ The minder' had been a movie, we could have like a movie premiere and Anuwa could watch from prison, and many could watch from Africa Magic or Red Carpet TV. However, the unveiling of Metgor wouldn’t make an average Nigerian watch NTA.

I think Metomi is a very good story and Yomi Fabiyi is one actor I can now vouch for as far as a good storyline is concerned.
I believe he has the touch of a very creative writer… but as a writer, a student of the theatre, and a literary critic, every little detail doesn’t bypass us.

Kudos to all the cast and crew. Excellent acting from Toyin Aimakhu as always…
Cheers!

- April 13, 2016
Email ThisBlogThis!Share to TwitterShare to FacebookShare to Pinterest

Wonderful Review Bose! Keep it up.
I'm not that a fan of nollywood movies, and even this one, I watched it for over a month (5mins at a time) because of my partial interest but I found the story as told; Great!

I hope the crew find your review and improve on next movies.

Wow! Labos. You know i came on google to search if actually the novels exist and where i can buy it. Alas!My very own Labos is giving me answers to my questions. I am just soo proud of you. So sad no book like "The minder"actually.

Wow! What a review this is?! Well, I found myself for the same reason the last commentator did - wanting to know if "The Minders" actually exist. Unlike him though, I am not disappointed it doesn't - we know all it would entail after all. A nice plot and cast by Yomi Fabiyi; he's in fact an icon and a force to reckon with in Nollywood. "Dele" was awesome and Anuwa, Toyin Abraham, as usually, was not disappointing (I love how she acted especially when she was scolded and mocked "unknowingly" by Dele - very typical). I hope Fabiyi discovers your review as I just did, sir. You divulged by critique mind. Kudos!

Wow thanks for the review. We need someone like you to write stories for our Nollywood actors.

Thanks for your review. I hope the editors of nollywood movies would sometimes seek external critics. It is a nice movie though. That guy Dele, is Tomiwa Oshonuga, a graduate from the University of Ibadan.