Fans Get Under Peter Okoye's Skin, See His Reaction... 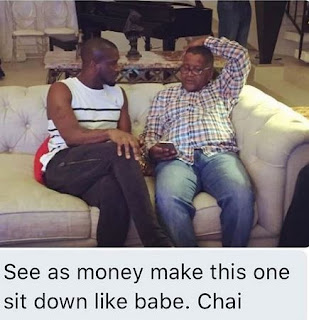 Peter Okoye over the weekend had a private party celebrating his birthday with twin bother Paul at his new mansion in Lagos. The party had important people in attendance including Africa's richest man: Aliko Dangote was also in attendance.
As usual, an Instagram post followed with Peter sharing the picture of himself and Dangote on his page. Little did he know he had bothered a sleeping dog. His fans turned to trolls as the artiste was attacked mercilessly on social media for his sitting posture in the picture.

Without wasting time, funny memes followed the attack and the one that had people talking was the attack on Peter's sexuality. He was called gay just because he crossed his legs and paid attention to Africa's richest man.
Peter who is one celebrity with zero tolerance for trolls and negativity could not hide his feelings as he went on to share a picture of himself this morning with the caption: "Attitude when you give Zero F..."

This is an indication that the trolls got under his skin and he could not help but react in his own way. Meanwhile, a surface dissection of his reaction implies that he doesn't care, while a deeper dissection shows us that the superstar indeed cares.
La'bos
- November 21, 2016
Email ThisBlogThis!Share to TwitterShare to FacebookShare to Pinterest