How Does Maje Ayida Feel About Toke Makinwa's book? Considering The Dirty Revelations. 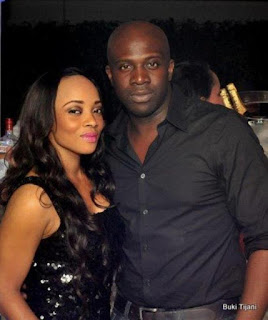 The book On Becoming written by media girl Toke Makinwa has hit major book stands after it was officially launched amidst fanfare yesterday; 27th November.
Many of us have not had the opportunity to read the book which is an autobiography/memoir but after several teasers and sneak peeks, we have an idea of what is written in the book.

Strategically divided into fourteen chapters, On Becoming literally spills Toke Makinwa's guts and heart. She takes us fully into her life from the past and to the present.

While this article is not a review of the book per se, we cannot help but turn the situation inwards and briefly wonder why toke could not weave her facts into fictions without throwing obvious stones.
We have noticed from peeks that Toke did not mince words, neither did she coat the facts, she nailed them on the head, mentioning her ex husband's name without a thought of the past or a thought for the future.
In the book, the YouTube star made direct references to her shattered marriage and her life with ex husband Maje. Not only did Toke air many dirty laundry in public, she also totally smeared her ex's reputation with the disclosures.
Chapter eight of On Becoming discloses how Maje infected her with a Sexually Transmitted Disease and did the same to his mistress Anita. according to toke, it was not the first time. "...days later I began to itch in my private part..." she revealed.
In another chapter, chapter ten precisely, we found out how Toke got wind about the other woman. She reveals that her ex loved sex tapes; he had one with her and one with the other woman!
Without doubt, Toke tries to purge herself of hurt and pain by pouring it all out in the book, but a side of us can't help but have a little thought for Maje whose name was spilled in the book in reds and blacks.
If you only knew Maje as the man who cheated on his wife, Toke tells you in her book that you do not know Maje for he is not just a cheater, but an abuser, an unfaithful husband who infects his wife, a lover of sex tapes among-st other black and red qualities.
We do not need to be told that Toke feels nothing for this man anymore, but we are wondering, does she have no care for his reputation? Whatever is left of it.
In all of this, how does Maje feel? Is he somewhere hiding his head in shame? Is he scared of stepping out tomorrow; now that everyone knows his story? Or, is he cool with the whole thing?
We might never know...
La'bos

- November 28, 2016
Email ThisBlogThis!Share to TwitterShare to FacebookShare to Pinterest