Matters of The Heart With La'bos: He Ruined My Life, Now He wants My Forgiveness... 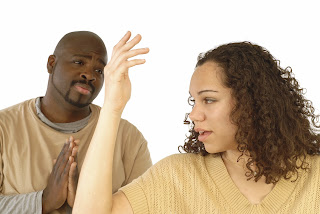 It all started two years ago when I met Quadri in Lagos. I was attracted to him immediately I saw him walk into the restaurant... in fact, I almost choked on my bitter lemon drink. I watched with interest as he walked confidently to the serving desk, placed his orders and turned around with a tray laden with food and drink...He must be famished, I thought to myself. Before I knew it, he had walked to my table with a very friendly smile, asked to occupy the seat opposite me, I nodded, smiled and grabbed my drink. He was more attractive up close.


Before the end of his meal and mine, we had known so much about each other and had even fixed a date to meet...actually, he complained about the spice in his fried rice, but i felt it wasn't bad...we argued and he ended up boasting about his culinary skills which made me laugh and call his bluff- hence, the date, in his house to sample one of his delicacies!

That was it! Not love, not even infatuation, just a mad rush of lust and sexual attraction that we both could not help... We were chatting over dinner at his place and one thing led to another... A simple perfunctory kiss led to hungry passionate kisses and before we knew it, our clothing irritated us and we found our way out of them...we did not make it to his bedroom where the sight of a bed might have jolted me out of my temporary insanity. We made love there and then.

It was wrong, it was mad, it was not me, I didn't even know his surname, he didn't know mine. I had played the harlot and it tore my heart as I left his place that day. I couldn't even look at his face. I had never done a thing like that. "I just want to die" I wrote in my diary when I got home. I felt so bad. I knew he wouldn't call me again, what responsible man would contact a lady who had sold herself so cheaply on the first date?

I was wrong. He called me that night and the morning after apologizing profusely for what happened. I wasn't sure if it was a dream or something else, but he actually wanted to see me soon...oh!
That was the beginning of our relationship. A beautiful affair despite the shaky foundation. I loosened up and allowed myself to enjoy the love he showered on me. He was doting and caring and more. He showed me more love than I expected, I relaxed and believed in the love i had found. Seven months after the beginning of this relationship, I got pregnant!


What luck!  How could I be pregnant? It was a mistake on my part, I miscalculated my cycle and I got it all wrong. It was a very wrong time to get pregnant, but I was...thank God Quadri loved me and had actually said he wanted us to marry soon. I waited for two months to be sure, before I told him.
***
"You are kidding me right?" was his first reaction... I took it for a blossoming joy and I shook my head and smiled.
"You must be kidding Khadijat! What do you mean you are pregnant?" His voice rose and he stared at me with venom in his eyes, I only stared at him, too shocked for words.
"Anyway, there's no need to be furious. Who is responsible?" He asked and my eyes almost popped out of their sockets.

"Quadri, what do you mean by that ?" I asked, too shocked to make a longer statement.
"Of course I should know who...or is that a secret?" I couldn't believe my ears
"Quadri, why are you talking like this? You know everything about me, including all my past relationships...what are you saying?" I was close to tears.
"See, I know only what you told me, I am not crazy and I do not trust you enough to accept responsibility for that child" He said brutally.

"What?" I intoned
"Yes, if you could sleep with me on our first date, only God knows how many other men have enjoyed such favors" He said and looked away. I could not listen anymore, the brutality of his words tore my heart, tears blinded me as I left his house. I was confused and hurt  and shocked. how on earth...?

I deliberated on an abortion but decided against it... I heard nothing from Quadri and I decided to let him be. I contacted his closest friend and was shocked to know that He had told him that I was trying to make him responsible for someone else' baby-He had even given him details of our first date. He told everyone who cared to listen before they could castigate him for neglecting me. There was no one to turn to. I had no stable source of income. At twenty seven, it was a big shame to be caught in such situation. My parents were disappointed but could do nothing but support me. My siblings stood by me, my friends who knew were with me, yet it wasn't easy.

I saw hell during pregnancy, I could barely get the necessary things for my coming child... I was seven months pregnant before I could register for ante natal. Now I have a cute baby boy who is my joy and life...he is four months old and luckily, I got a job when he was two months, soon, I'd be able to support myself and my child.

Last month, Quadri came, begging me to forgive him, wanting to claim my son. Of course I swore to kill him if he tried anything but he is still begging...
Dear Readers,
Please tell me why I need Quadri in my life after everything? After the humiliation, rejection and suffering? please advice me on how to deal with the situation...presently, I feel nothing other than hatred for him.
Waiting to hear from you.
Thanks.
La'bos
- November 21, 2016
Email ThisBlogThis!Share to TwitterShare to FacebookShare to Pinterest

I think u should forgive him. What if he didn't come back till the child has become a teenager or an adult? Everyone deserves a second chance which I think he thought of and wants to give u, so u should give him too.As for the relationship, check deep down ur heart if u still want him or not? But be like a crab; never let ur guards down easily anymore.