Sony Music And The Numerous Contract Forms: What Are They Signing? 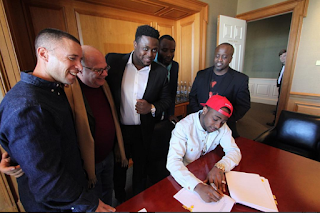 Nigeria is one country where things lose their value/relevance as quickly as they gained it. It was with great aplomb that the news of Davido’s call to Sony music was received by Nigerians especially the media. As far as Nigerians were concerned, our boy had hit it big, in fact, at that point, we believed Sony music had decided for us who was the best musician from our continent.


Little did we know that they had made several print outs of the contract form! While we were still waiting for the big hits, the endless collaborations and great productions from our dear O.B.O, the news of Wizkid joining the team struck us in the face.

Was Sony planning the next big thing with these two? How come they chose Wiz after Davido? Would there be collaboration at last from these two from the stables of Sony music? Several thoughts kept coming and still, we waited patiently. Apart from the great delay in Davido’s career, nothing worthwhile or different happened. Neither was there any from Wizkid.
We were still hoping, then singer Ycee grabbed his own form and signed while the Paparazzo fired shots.

Then earlier this week, another goggle wearing artiste grabbed the pen and signed the dotted lines of Sony music’s contract form! The media rejoiced with the cassava king Mr. Tekno and I’m here wondering: what exactly are these guys signing; a music contract or a life insurance policy?
Is Sony music still the Sony we think or one Mr. Sony Onyeador in Alaba market? Who is next on Mr. Sony’s list? If Mr. Sony can hear our cry, can he just get to work already or he wants Vic O on the list?

The truth is; our guys were doing just fine without this diversion of Sony Music, now we don’t even know what’s up… You guys can be rest assured that we won’t even notice the next signee, and that is a promise.
La’bos
- November 25, 2016
Email ThisBlogThis!Share to TwitterShare to FacebookShare to Pinterest