The Other Woman In Toke Makinwa's Book Speaks Out... 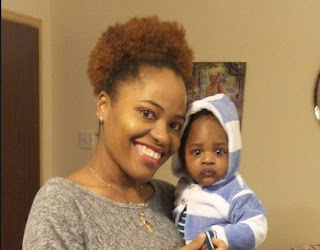 There is a popular saying that there are sides to every story. Toke Makinwa and Maje Ayida's tale has continued to trend especially after Toke the estranged wife revealed some dirty secrets about the relationship through the launch of an autobiography titled On Becoming.
A whole chapter was dedicated to Anita Solomon the woman Maje reportedly cheated with and even had a son with.

Toke mentioned Anita's name countless times, revealing that Anita and Maje also made a sex tape. She went ahead to tell the world that Anita was also infected with STD by Maje.
She titled the chapter "The Other Woman"

Anita Solomon has finally spoken out after all. In a tweet earlier this morning, Anita shares some words with her followers in an indirect jab at Toke for spilling her guts in what some have called 'uncalled for'
Anita tweeted "The strongest people are not those who show strength in front of us, but those who win battles we know nothing about"
Apparently, Anita who now has a son for Maje has her own battles and definitely has a story or two to tell. The law practitioner has also moved on with her life after the whole brouhaha. Reports have revealed that Maje and Anita have also gone their separate ways and the only bond between them is their son.
Toke has told her story as blatantly as possible in what I call the Kardashian way because she has the platform; however Anita has not told hers  and we probably will never know except for some revealing tweets like this once in a while...
La'bos
- November 28, 2016
Email ThisBlogThis!Share to TwitterShare to FacebookShare to Pinterest