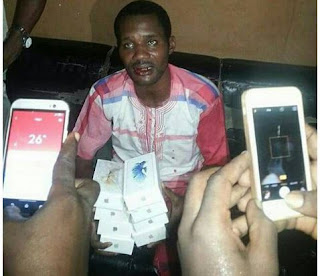 This is coming as a shock to almost everyone in the industry... while some think it is the work of the devil, many are simply playing the denial game, while several others believe it could be a publicity stunt.
These pictures however speak a different story. According to reports the ex lover of Nollywood actress Toyin Aimakhu; Mr Seun Egbegbe was caught by an angry mob in computer village this morning and beaten to a pulp for stealing 9 brand new iPhones in Ikeja.


According to the reports, Seun came into the market with the pretense of wanting to purchase some phones, the report has it that he came in the company of some other guys.

He allegedly went into Kaalcech Innovations and consultancy, requested for 7 iPhone 6 and 2 iPhone 7 only for him to make a fast disappearance without making payments. The sales girl was only stunned for a minute under hypnosis but came back to her senses and began to scream for help.

Angry men caught up with Seun Egbegbe who was already trying to leave. He was beaten and almost lynched but for the timely intervention of the MD of Kaalcech who called the police.

The movie promoter is currently at the Area F station where he is currently been detained and answering questions.

- November 22, 2016
Email ThisBlogThis!Share to TwitterShare to FacebookShare to Pinterest