Akwa Ibom Church Collapse: How An Aide Sacrificed His Life For Governor Udom's 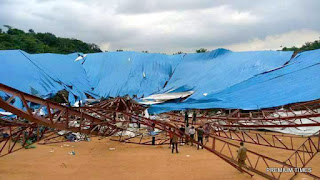 New reports just gathered has shown that an aide to the Akwa Ibom state Governor Udom gave up his life to save his master's during the Uyo church collapse disaster.


In the disaster, at least 27 persons lost their lives, while others sustained injuries when the roof and the iron beams in the building housing Reigners Bible Church, Uyo, collapsed on Saturday during a church ceremony.

According to a church Evangelist Ubong Mboho, who was inside the collapsed building told some news men that he witnessed the governor’s aide sacrifice his life to save the governor.

Governor Emmanuel further corroborated the story when he recounted how God saved him from dying in the ill fated incident.
- December 12, 2016
Email ThisBlogThis!Share to TwitterShare to FacebookShare to Pinterest