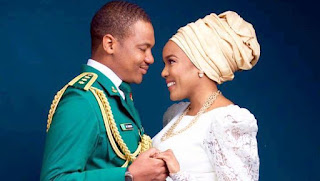 One of the daughter's of a factional People's Democratic Party Chairman Ali Sheriff is set to tie the knot in what promises to be a lavish ceremony to Ronnie one of the aides of Army Chief, Buratai.

The bride to be Halima is a fashion designer

who is a graduate of the Canadian University in Dubai while the lucky groom to be is rumored to be one of the Northern Nigeria's most handsome and eligible bachelors.

The preparation for this December wedding is already in full bloom as the couple have also released some beautiful pre-wedding pictures.
The wedding is slated to take place later in the year in the Borno state capital Maiduguri.

- December 04, 2016
Email ThisBlogThis!Share to TwitterShare to FacebookShare to Pinterest