Chapter 10, The Most Anticipated Chapter In Toke Makinwa's Book Is Non Existent 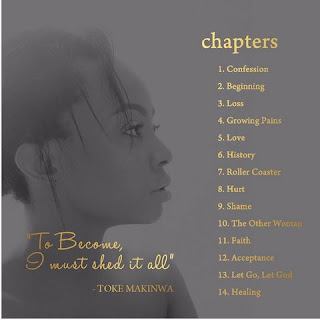 When Toke Makinwa the author of Best seller On Becoming gave us a sneak peek into her book before it was released and launched, some chapters caught our attention and we just could not wait to get hold if the book and read!
One of those chapters was the tenth chapter. We were intrigued already as the title of the chapter was enough to arouse our curiosity. We really wanted to know about ‘The Other Woman' as the chapter was titled.

So it was not really surprising when some of us could not wait to get the hard copy, we jumped at the first opportunity to actually read On Becoming. Yes, we settled for the downloaded version.
With bated breadth and barely suppressed interest, we finished chapter nine and dragged the cursor down to proceed to chapter 10, the reason we were reading.
The shock mingled with disappointment we got from several blank pages could not be quantified. Some of us thought it was an error while downloading.


However when the author of the book tweeted about our version being incomplete, we knew we had to get the ‘complete’ book. Yes, it was just a chapter mission, but that chapter is a very significant one!
So, without much ado, we went for the hard copy only to find out that the chapter symbolically titled HER was just a number of blank pages.
Why?

A literary aesthetic or ingenuity. Of course it was not an error of commission, so what was Toke Makinwa's aim?
Can we say that she was so overwhelmed by her ‘feelings’ for this other woman so much that only silence can effectively portray what words can’t?
Our literary minds tried to rationalize her intentions and we could only come up with more blank pages as only the author of On Becoming can defend her work.

However, all we can come up with is that the blank pages either signifies moments that are best forgotten, someone that is best forgotten, or that we would rather not talk about even though they existed.
The blank pages depicts silence or several huge sighs! Well, this is literature and anything is possible…
We could be wrong on all accounts and there’s actually a second part of the book in the making…
La'bos
- December 16, 2016
Email ThisBlogThis!Share to TwitterShare to FacebookShare to Pinterest