Doctor Orders Wizkid To Cancel All Shows Till February. 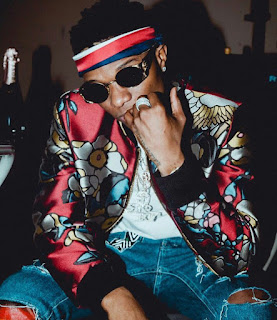 If you were looking forward to a show with a Wizkid performance this festive season, sorry to disappoint you, but Star Boy has been ordered to rest by his Doctor.
January 2017 does not look too good either as the Grammy nominee will be extending his rest through the first month of the year 2017. 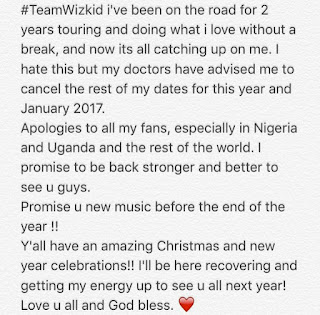 In a press release from Wizkid, he confessed that he's been working non stop for two straight years and this is having a toil on his health.

Hence, to avoid stories that touch, he is taking orders from his Doctors to stop all shows and tours for the next two months so as to have his long deserved rest.

He sent his apologies to his fans worldwide especially in Nigeria and Uganda who were probably looking forward to a Star Boy show.

Rest well and be strong Star Boy, February is just around the corner...especially since the Grammy's hold in that month.

- December 08, 2016
Email ThisBlogThis!Share to TwitterShare to FacebookShare to Pinterest