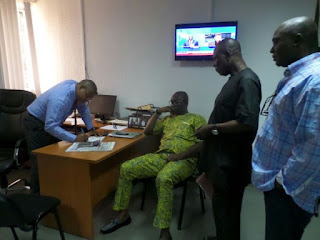 The Economic and Financial Crimes Commission EFCC in June 2016 ordered that Governor Ayodele Fayose's Zenith account be frozen on allegations that he took money from a former National Security Adviser, Sambo Dasuki, who is currently being prosecuted for over arms purchase scandal.

Two days ago however, Taiwo Taiwo, the presiding judge in the appeal case, lifted that ban on the account  stating that Fayose enjoys absolute immunity from prosecution and no punitive measures could be taken against him. 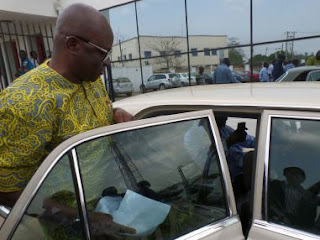 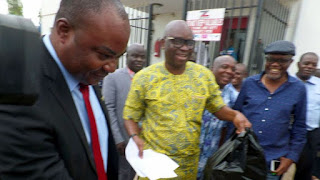 In celebration of his victory, Governor Fayose and his entourage stormed a Zenith bank branch in Ado Ekiti to make a withdrawal.

Fayose's media assistant, Lere Olayinka circulated pictures showing the transaction and the governor carrying his bag of money to his car while posing for the camera.
The EFCC has however maintained that it would appeal the ruling.
- December 15, 2016
Email ThisBlogThis!Share to TwitterShare to FacebookShare to Pinterest