Flavour N'Abania On Daddy Duties With His Two Kids 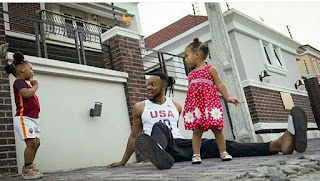 Flavour N'Abania was pictured with his two kids from his two baby mamas Sandra Okagbue and Anna Banner.
We know that the two women in his life are not best of friends so we really cant say what the arrangement was.

The picture was most likely taken at the singer's house, however we can't say if his two baby mamas were also around with their children or not.
All we can say on good authority is that Flavour indeed cares for his two daughters,
- December 05, 2016
Email ThisBlogThis!Share to TwitterShare to FacebookShare to Pinterest