Headies 2016: Who Deserves The Next Rated Crown? 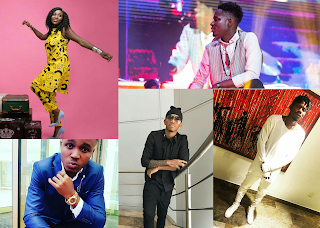 Last year's Headies awards remained in the news for a long time even after everyone took their bows. The ceremony and the events that took place continued to trend for several reasons, one reason that stood out however was the clash of two record label bosses who believed their nominated star deserved the Next Rated crown.
year's
Sine the inception of the Headies, the Next Rated category has been one category with huge expectations and more importantly, a category that has its nominees praying fervently to win.


Not only because it is the only award that comes with a brand new car as gift but also, it is an award that reveals the artiste to the world. The Next Rated award is about the most coveted in the industry among fast rising stars.
2015 Headies was laced with many controversies and murmurs as many didn't believe that the best man won while many also believed that Headies could not have made a better choice.
We all know it is difficult to make choices where extremely talented people are involved.
The nominees for 2016 Headies in the Next Rated category are 5 multi talented fast rising super stars who have already made names in the entertainment industry.
The nominees are:
Without doubt, these are 5 talented entertainers, but there is one car and one plaque, who deserves to take it home? Who deserves to be the Next Rated thing in the music industry? Who knows, this vote might just count.
- December 15, 2016
Email ThisBlogThis!Share to TwitterShare to FacebookShare to Pinterest