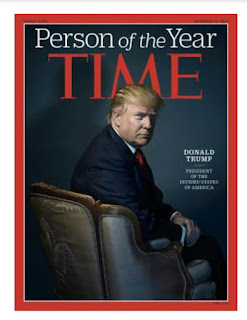 For the 90th time, the world’s most influential tabloid TIMES has named its person of the year; this indicates the person with the greatest influence on the events of the year in focus. The influence can however be good or bad.

Take note that even Boko Haram leader Shekau once made the list of 100 most influential people.

So, which is it this year; good or bad? Considering the Donald Trump we have heard and read about. Not surprisingly, the world seems to disagree with TIMES’ choice just as it disagreed with the emergence of Trump as the next President of America.

However, whether we like it or not, this real estate self made baron is as influential as they come. The influence of Donald Trump on the world is not minute but a great one as nothing will ever remain the same.

Not only did Trump pull the rug from under Clinton and Obama, despite how much he was crushed by Hilary’s campaign, he was undaunted and he won. He rose from being just an ordinary billionaire to being the President of the United States.

2017 will be the year of his rule, and like all newly elected leaders, Trump has a chance to fulfil promises and defy the expectations of the world, he has the chance to prove those who still doubt his victory wrong.

Well, all hail Donald Trump; TIME’s 2016 Person of the Year!

La’bos
- December 07, 2016
Email ThisBlogThis!Share to TwitterShare to FacebookShare to Pinterest