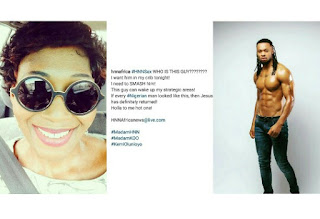 We told Flavor but he would not listen, always flaunting those sexy abs and making mouths water, especially mouths of celibate sex toys dependent woman.
So, Mr. Flavour the baby daddy of two beautiful women decided to do what he knows to do best, after music of course; he flaunted those killer packs and got the attention of the one and only HNN of Africa, Kemi Omololu Olunloyo.

Like the proverb, she did not look once but several times and decided she had to have him!
Well, not one known to hide her feelings, Madam KOO put up a post announcing her sexual desire for 'the man' whose hotness had aroused her desires.

Flavor should be flattered, it is indeed rare for Olunloyo to show interest in anyone talk more of showing sexual interest. She actually stated that she would love to smash him in her crib.

Pardon, but some of us young folks don't even know that word! Madam KOO is indeed an all round.

Now, what does Flavour think of this? Flattered, insulted, annoyed or excited?
He should not be secretive about it, we have to know when the smashing takes place, hopefully neither Anna nor Sandra will care very much.

La'bos
- December 07, 2016
Email ThisBlogThis!Share to TwitterShare to FacebookShare to Pinterest