Pastor Adeboye Reveals How Abacha Tried To Kill Him During His Regime. 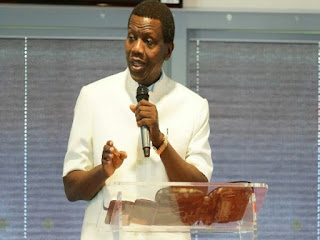 One of Africa's most respected Men of God Pastor Enoch Adejare Adeboye the General Overseer of Redeemed Christian Church of God has made shocking new revelation at the just concluded Holy Ghost Congress.


Pastor Adeboye revealed that a certain late past Nigeria Head of State tried to take his life during his tenure just because he prayed for a smooth transition of power.

According to Adeboye who made this revelation at the camp, information reached him before the Head of state could get to him and he was able to hide and save his life.

Although Pastor Adeboye was indirect about the revelation, he carefully avoided mentioning a name, but it was clear he was referring to the Abacha Military regime.

"You will remember those of you, who know the details; Nigeria was living under a siege at a particular time.
“There was a reign of terror by a military president who wanted to transform to a civilian president.

“In the process of trying to realize his ambition, his herbalist told him that this plan cannot come to pass because of a certain man who is praying at a place called Camp and that unless you remove that man your plan won’t work.

“And so information came to me that they are coming for me and in those days when they come for you that is the end of the story." He said

Pastor Adeboye stated that he escaped death and his tormentor even died before him.
- December 13, 2016
Email ThisBlogThis!Share to TwitterShare to FacebookShare to Pinterest