The Man, The Woman And The Other Woman: A Tale Of Love And Deceit 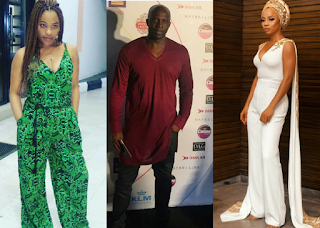 Permit me to dig into this troubling matter of three celebrities whose private lives are not so private anymore.

It is the story of Maje Ayida ( The Man), Toke Makinwa (The Woman) and Anita Solomon (The other woman)


One became a celebrity by choice, the other by affiliation and one attained this status by scandal. They are all celebrities.

The marriage of Toke to Maje: We didn't see it coming. Even though they were matured, eligible and dating we still did not see their wedding coming until it hit us in the face.
Knowing Toke the way we did, we expected a full wedding, with the frills, the trimmings and the train. But our darling Tokstarr did just the opposite. She tied the knot with boo in a sudden ceremony leaving us to wonder the circumstance that dictated the sudden and hush affair.

The Relationship: The Toke that got married to Maje was light skinned, not because she was born so, but because she was changing herself for the love of her life. For according to Toke, she 'lightened' her skin because the other woman was fair and half Lebanese. The relationship had only few bright moments, it was filled with deceit, fear, mistrust and lies...love only blossomed on one end.

Toke knew of Anita and all the other women but gladly said 'Yes' and was thankful that he chose 'her' over the other her!

Things women do for love: Toke Knew her fiance had another woman for according to On Becoming, he was an on and off kind of guy, here today, there tomorrow. Yet she loved him. She was willing to do anything for him, willing to change her ways if it would make him stay. Now that is love...

Anita could not get the ring, she lost in that battle, Toke got the ring, yet Anita was waiting by the side, ready to have Maje whenever. She knew she had lost in the battle of the ring, yet she waited...and turned herself into a side chick. Let's take a stroll into Anita's heart, we probably would find great love there for Maje. Only love makes a woman do stupid things.

Again let's imagine the words and the scenarios that Maje was weaving into her mind, she might not even be the harlot that we have  painted her to be. She could be a victim too... In fact, she is a victim too.
Note that she didn't get the ring but she got the baby! Maje's baby.

Two women and the man: Two beautiful women loved him, he was a confused and indecisive man. He was torn between the choices. They both had good careers but he could wed just one. He was good, give it to Maje, he played with their minds so brilliantly that none was able to get over him. And when he swayed and made the ring decision, it was to Toke the celeb. Poor Toke took him, poor Anita was devastated.

It took him only a little time to go back to the other woman.

Let's imagine him on his knees begging for forgiveness, shedding a tear or two, reaffirming his love and claiming his marriage was a mistake, then gathering her into his arms whispering sweet words with a shaky voice!
"I miss you" "I love you" "I can't get you off my mind" "She is nothing like you"

On one occasion, he said to Take: "You won't understand, I care deeply for her..." If he could say this to his own wife about a mistress, please imagine the things he would say to his mistress.

Things a woman want to hear.
She lost her guard and in a snap, became a side chick... Then came the baby and then the bubble burst.

Maje: Is Maje the villain we have called him or does he have a word or two to share? Was Toke a bad wife? Did she make him regret his decision to marry her?
Remember he apologized to Toke for his 'mistake' and even vowed to win her love back at all cost.
How did this make Anita feel? Betrayed? Used? How exactly did she feel?

Don't forget about Crystal; another woman with his child!

We gathered that at some point, Maje had even considered a divorce"...Maje had once written an email to me, requesting a divorce."
Why then did he not go ahead? Was his mission to destroy Toke?

"The last thing he said to me was..." I'm going back to her, she's a much better person. My worst mistake was marrying you"
Wait, how does a man say that to a woman!!!
Maje's heart is indeed stronger and tougher than his biceps. Made of rocks, but not pretty rocks.

This is my conclusion:
Toke is not the average Nigerian woman. She loves like her life depends on it. I can imagine that moment he gave Maje 2K knowing quite well the money was to be given to another woman, yet she said nothing.

Things we do for love.

Maje never really loved Toke, maybe he did in his own warped way. He married her most likely because he wanted something from her. A user who is used to using the opposite sex for his own selfish aims.
He was using both women.
Anita is a lawyer, very useful to him; Toke has a great career that promised to open way for funds.

There was Hauwa, Aisha, Crystal and several undocumented ladies in his life.

The Woman has spoken in fourteen chapters, The Other Woman only sighed through a tweet, The Man is mute.
In my opinion, let him remain mute forever, he has nothing to say!

- December 02, 2016
Email ThisBlogThis!Share to TwitterShare to FacebookShare to Pinterest