Woman Gives Birth To A Two-Headed Baby In Lagos 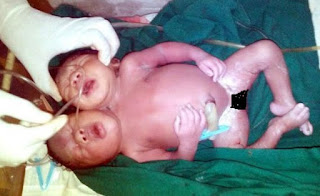 Med-In Specialist Hospital Ogudu Lagos on Tuesday December 13 recorded a strange occurrence as a pregnant woman expected to have twins gave birth to a two-headed baby.
The baby according to reports was delivered around 6:30pm through an elective caesarean section, has two heads, a neck, chest, two legs and two hands.

Before the birth of the baby, medical scan had shown that the pregnant woman was expecting twins, hence, mother and medics were expecting a set of twins as indicated by the various scans she underwent in the course of the pregnancy.

Staff at the hospital reported to newsmen that although the mother is now in good health, she still doesn’t know the condition of her child.
The father however is already in the know as he has gone to LUTH by referral to ascertain the chances of survival since the medical condition is totally different from conjoined twins as the baby has only one set of internal organs.

The extremely rare case is thought to be brought on during the early stages of pregnancy as a result of genetic mutation. Med-In Hospital Manager Dare Moses said the baby was taken to Lagos University Teaching Hospital (LUTH) so that tests can be conducted to ascertain if they share also vital organs like hearts and lungs.

The Ministry of Health has been notified of the development. The hospital disclosed plans to inform the baby’s mother.

- December 15, 2016
Email ThisBlogThis!Share to TwitterShare to FacebookShare to Pinterest