Azeezat, Sunny Neji: Why these two should make a comeback! 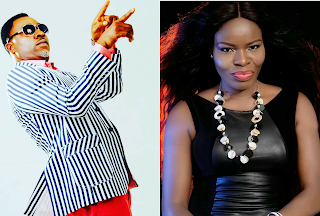 There is no denying that its been a while we heard from highlife guru Mr. Sunny Neji and song bird Azeezat.
The truth is there are fans out there who miss these two singers.

Azeezat was one of the first few talented vocalist the music industry produced.
Her live songs reigned in the early 2000s. The singer had a way of warming her way into your heart with her oddly cool yet powerful voice. Azeezat suddenly stopped serenading us without proper notice.

Many times she promised us a comeback but we are still waiting. It is impossible that the singer's talent disappeared with age. Totally impossible, as she was not just a vocalist but a lyricist!

That is one reason we want her back.
Sunny Neji... This highlife maestro was a man of his own, a singer with a difference. He was just on his own lane doing his thing and stealing shows. His track 'oruka' still rings in memory.

Sunny Neji is also a very talented vocalist that we miss and would love to have back on the scene.
From experience, we know that talent does not diminish with age, it gets better. We have seen enough to believe this...

So where is Azeezat and where is Sunny Neji?
Can we get a surprise single from these two? It would make thousands of waiting fans glad!
La'bos
- January 25, 2017
Email ThisBlogThis!Share to TwitterShare to FacebookShare to Pinterest