Toyin Aimakhu's New look Vs Mercy Aigbe's Who Is The Gangster Queen? 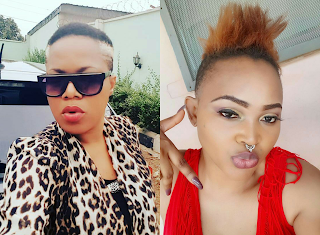 About a month ago, Nollywood queen Mercy Aigbe decided to go on a low cut with a gangster outlook, cutting off the sides of her hair and tinting the remaining part a golden brown.

As usual her fans loved it and cheered her on, no doubt, she is a trend setter and they love her for it.

Surprisingly, World best actress Toyin Aimakhu now Toyin Abraham decided to tread the same path. She introduced us to a new look days ago when she unveiled a new hair cut, not so similar to Mercy’s but also a gangster look all the same.

We also hailed her and gave her thumbs up, until we realized that we now have two of our best Nollywood actresses now have gangster looks with their wigs off.
You know we have to ask, who rocked the gangster look best? Who deserves to be crowned the queen of the ghetto with this new look?

- January 31, 2017
Email ThisBlogThis!Share to TwitterShare to FacebookShare to Pinterest