Watch Shocking 'Sexual' Performance Of Comedian Akpororo With A Unilag Student On Stage. 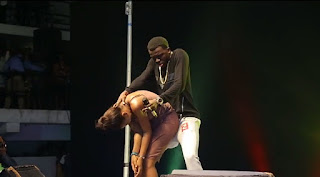 https://youtu.be/4kwvbdGZP4M
The young lady invited on stage did not know what awaited her as the comedian who is also a fantastic singer held her in a sexually suggestive manner and even made sexual moves with his body hitting hard against her body. Akpororo did not stop there as seen in this video but also bent the lady forward and continued his sexual moves.
According to Akpororo, a white entertainer could Romance a lady during a performance without turning it to a sexual performance unlike a Nigerian who would use the opportunity to his advantage.
It however went beyond comedy: as expected in a crowd of young men and women with wild imaginations, there were more screams than laughter in the audience. The sexually suggestive moves left very little to the imagination leaving the lady embarrassed and the audience hyper active.
No doubt, our comedians will do anything to make their audience laugh, now we can't help but think if this act on stage was not a bit over the board, considering there is a Mrs. Akpororo who has a stake here.
Watch the video and see the Akpororo you have never seen...
La'bos
- January 30, 2017
Email ThisBlogThis!Share to TwitterShare to FacebookShare to Pinterest

This is cool post and i enjoy to read this post. your blog is fantastic and you have good staff in your blog. nice sharing keep it up.
viagra kaufen

Good Post, I am a big believer in posting comments on sites to let the blog writers know that they've added something advantageous to the world wide web
levitra kaufen