Big Brothers' Gifty Has News For You And It's About Dbanj! 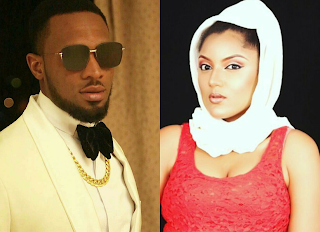 OK, so we thought that after her episode with Banky W, the lashing that followed and her eviction, Big brother Naija's Gifty would lay low for a while, well, we have news for you, she's not laying low.


Gifty has began her press rounds and while at TheBeatzFm today Gifty revealed that she's so taken with Dbanj the Kokomaster.
In a kiss, kill it marry game, the Semi British Gifty did not even wait to listen to the names of the other celebs before jumping to say she would love to kiss Dbanj the Kokomaster.
While it wasn't a really strange statement or  confession, considering that the Kokomaster has great kissable lips, Gifty's glow as she said the words revealed more than the game. But she was quick to tell us that it's just a game and she should not be quoted.
But hey, it's Gifty, we can't help but quote her, not with that spark in her eyes as she said Dbanj's name.
La'bos
- February 22, 2017
Email ThisBlogThis!Share to TwitterShare to FacebookShare to Pinterest

Semi british? Are accent to me is from another planet.