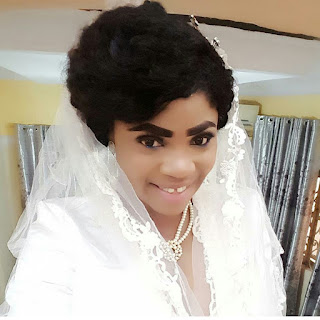 Nollywood actress Eniola Ajao has caused a little stir on Instagram after posting some photos of herself in a bridal costume without information on what was going on in the photos.


While many were wondering if the actress was married, others complained about her make up with was described as a total failure.
The actress did not respond to any of the questions posed to her by her fans but as for being married, we were able to gather that the actress was actually on the set of a movie. She posted pictures of herself with fellow actors to at least explain that she wasn't getting married.
However, there was no explanation or excuse for the make up on the face of the actress especially the brows as pointed out by many of her fans.
These are days when the art of make up has become so easy and popular that every lady has become a make up artiste. Hence, it is not acceptable for a Make up artiste to paint up an actress like that.
- February 10, 2017
Email ThisBlogThis!Share to TwitterShare to FacebookShare to Pinterest