I will serve you all my life - Davido goes churchy on us as he testifies in church. 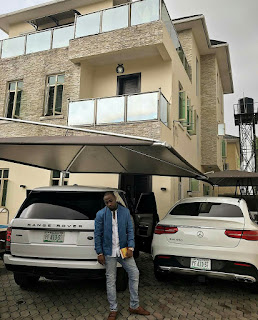 The CEO of Davido Music Worldwide DMW Mr. Davido has shown us that Sundays are for God as he went churchy on us after service today.


David who couldn't attend service last week because he slept late after a night of booze decided to honor God today after all.

He did not only attend service but also stepped out to testify. In his words,  the singer confesses that although God has blessed him bountifully, he had never thought of thanking him.

The singer also shared a photo of himself standing by his two latest rides in his mansion with a churchy kind of caption.

It can only be concluded that the Davido worshipped at RCCG city of David today according to the location of his post.

In his caption, the father of one acknowledges the supremacy of God and vows to serve him all his life. Davido even had a word of prophecy for his followers and fans...
"2017 will be great for us all" he prayed.

Sundays are for God... Davido just proved that he is a true worshipper. Can you spot his Bible?
- February 12, 2017
Email ThisBlogThis!Share to TwitterShare to FacebookShare to Pinterest