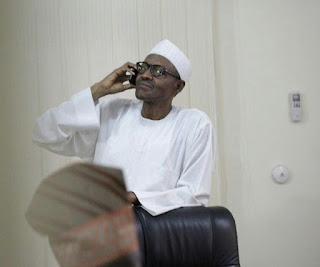 In the last couple of weeks, the average Nigerian has had doubts over the health status of Nigeria's president Muhammadu Buhari. Some would swear on their undug  graves that the President was no more.


Subsequently, many made fun of every picture that came out of London, calling it the result of a good photoshop.

It became more disturbing when the President could not address the nation and Nigerians had to hand on the two paragraph messages from the offices of Femi Adesina or Garba Shehu.

However, some Nigerians were thrown into a state of ecstatic jubilations yesterday after hearing the voice of their President during a prayer session organized for him.

The telephone conversation between Governor Ganduje of Kano state and the president was aired on Pyramid FM in Kano, the president thanked everyone for praying for his speedy recovery.

Some doubting Thomas still would not believe which is cool, just like have a fiance abroad who has failed to talk to you for months only for his mother to call you after several months that he is alive...you begin to wonder "why won't he talk to me"

Our President is alive and well, he is still our President only that we have a long distance relationship!

La'bos
- February 23, 2017
Email ThisBlogThis!Share to TwitterShare to FacebookShare to Pinterest