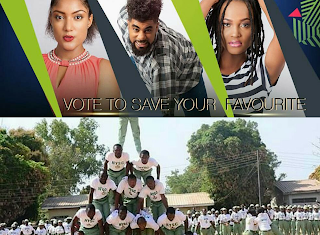 It was late in the night, very late in fact, the final bells for the night had already sounded and we were in our rooms.
Naturally, I was not just in my room, but already under the covers on my bed! I was one of the obedient ones.


My room was the top floor and Iyana Ipaja orientation camp has high buildings you know, so from my top bunk, I could see the world!
And I did see the world...
From kissing Corp members to smooching ones, some even dared all the odds and actually had sex in corners, I saw them all... The truth is they only met three weeks ago or less!
Immorality can never be justified, lack of self control is a big issue but I tell you that most of these moral, self righteous and 'holy' beings now calling for the head of BB Naija and it's organizers kissed strangers while serving their fatherland, many of them smooched and got smooched and some hid under the training bushes and went all the way!
The truth is youthful exuberance, lack of self control can be blamed not the organizers of this program. I don't watch Big brother, I stumble on it on social media, I don't like it either.
However, I recently saw a post by a lady on Facebook angrily cursing Big brother, I clicked her page and voila, she was the President of the NYSC Romance organization... She was in my platoon, she was so daring that she never waited until lights out. She kissed more than three guys in our platoon.
Here she was, angry about young men and women like her.
It's the same thing. Throw a bunch of healthy and sexually active young men and women together, add a good dose of time, sprinkle some lack of self control, a bit of mattresses, cameras are optional... You have what we have now!
La'bos
- February 23, 2017
Email ThisBlogThis!Share to TwitterShare to FacebookShare to Pinterest