See Photos Of The 60 Year Old Woman Who Married For The First Time... 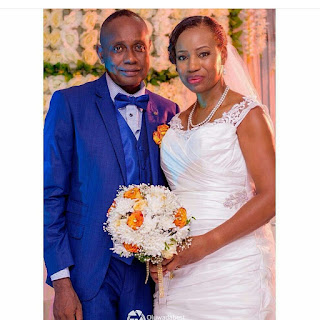 Delay is definitely not denial and this is relevant to the story of a 60 year old woman who got married for the first time yesterday after waiting for Mr. Right since she clocked 30.


The woman according to reports was never married to any man,  though it wasn't stated if she had children out of wedlock.
The 60 year old woman who has most likely reached her menopausal age finally met Mr. Right who took his precious time before making a grand entrance to sweep her off her feet.
At 60, many women are already grand mothers with countless grand children, but for her, she was just beginning the race and she radiated joy.
Despite her age,  she looked amazing in her wedding outfit and had just the perfect make up.
No one would have guessed that the stunning bride was in her 60s!

- February 04, 2017
Email ThisBlogThis!Share to TwitterShare to FacebookShare to Pinterest