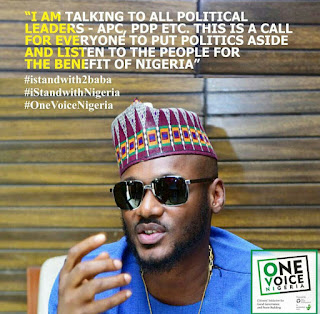 It was with great shock we received the cancellation of the February 6 nationwide peaceful march and protest which had been greatly prepared for by Nigerians in Lagos and Abuja.


The protest had generated much conflict as interests were clashing dangerously both politically and otherwise, still the convener of the protest had insisted that nothing would stop the march.
Only for Nigerians who had prepared themselves with a touch of green and white outfit to hear that the march had been cancelled with reasons of security threats.
No doubt, voices will rise at Tubaba in condemnation, many who have castigated him for thinking about the march in the first place will laugh at him for 'chickening' out.
Not to talk of the average Nigerian who would point fingers at Tubaba to have compromised and receive bribes!
Will Nigerians forgive Tubaba for this act?
Obviously, the protest had faced various levels of threats from all sides but Tubaba received great support from everyone as the hash tags alrady flooded the internet.
Media houses already screamed the news on headlines via print and online platforms, be ready to see headlines in the cancellation too, but this time Tubaba might not be called 'the Hero' any more!
As expected the singer is already coming under great attack for pulling out of the protest, some Nigerians have even threatened to go on without him and his colleagues if he is afraid of the government.
La'bos
- February 05, 2017
Email ThisBlogThis!Share to TwitterShare to FacebookShare to Pinterest