Two Things You Did Not Know About Acting President Yemi Osinbajo! 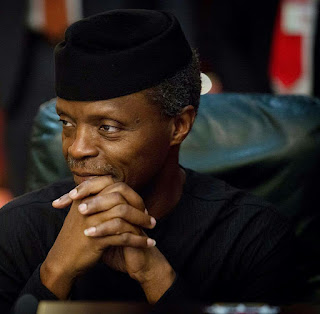 New insight into the life of acting President Yemi Osinbajo has revealed three things we never knew about the intelligent Professor.


In a recent video which shows the acting President testifying to God's goodness in his life, Yemi Osinbajo took us back in time to the days of his beginnings revealing these things in the process.
Yemi Osinbajo became a Professor at the age of 33! Isn't that totally amazing and also very insightful as it tells us of the intelligence of the vice president. The Professorial arcade as we know is not a child's play and it takes, great dedication, amazing brilliance and intelligence to achieve this feat. Hence it takes time for most to reach this stage. For Osinbajo to have achieved this feat at 33, and in the Law faculty too, we have an amazing Vice President.
Yemi Osinbajo bought his first New car in 1998! Wow! For years, this professor patronized second hand cars because he could not afford the luxury of a new one. Not until 1998 did Yemi Osinbajo move forward and bought a brand new car...that was 19 years ago.
Some may say it is not a testimony and not even worth talking about, well, it is, and Vice president Yemi Osinbajo just talked about it.
Professor Yemi Osinbajo further revealed that despite the fact that he was using 'Tokunbo' cars,  God kept him. He was never involved in any act that could be termed fraudulent in the quest for riches. And when he finally got his brand new car, it was God!
Amazing!
La'bos
- February 23, 2017
Email ThisBlogThis!Share to TwitterShare to FacebookShare to Pinterest