Body Of Dr. Allwell Orji Found As Reports Of His Many Suicide Attempt Surfaces. 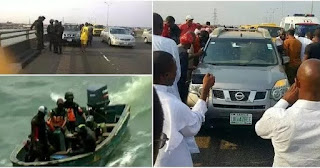 The body of Doctor Allwell Orji who committed suicide by jumping off the Third Mainland Bridge into the Lagoon has been discovered by the Marine Police.


The marine operatives began the search for his body since Sunday, moments after he jumped into the Lagoon.
His body has reportedly been found...

Meanwhile It has also emerged that Dr. Alwell Orji, had attempted suicide a number of times before he finally succeeded.
It was reported that the Doctor had four years ago attempted jumping down from the family’s two-storey house. Only the intervention of neigbours staved off the disaster.
Reporters who visited his home in Odunukan Street, Ebute-Ejigbo, off Morroco Road, near University of Lagos, was told that the young man had been suicidal for a long time.
“Four years ago he attempted to kill himself and, thereafter, had tried doing so on a number of times,” a man who pleaded anonymity said, adding, “since then, his family had been monitoring him. We don’t know the kind of sickness he was suffering from, but we knew he was being monitored. That was why he was assigned a driver to take him around.
It was gathered that the driver who took him out on Sunday was newly appointed and was not aware of his condition.
- March 21, 2017
Email ThisBlogThis!Share to TwitterShare to FacebookShare to Pinterest