Come, Let Us Reason Together : Why Did Mercy Aigbe Shun AMVCA? 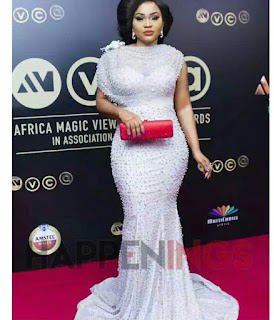 If there was one celebrity that made the public hunger for the AMVCA red carpet, that Celebrity would be Nollywood actress Mercy Aigbe Gentry!

After her epic fashion thrill at the last edition of the show, the actress became of of the most awaited on red carpets, she earned the right to be called a Fashionista ever since.

The actress' outfit last year was the talk of the industry, several fans even copied the style in honour of the MAGDiva Queen.
Hence, the eagerness to see the actress strut her stuff today.
Just yesterday, Mrs. Gentry posted a photo from last year's event in a flashback and made her followers guess what her outfit would look like today. The response showed how much they wanted to see Mercy slay today, only for Mercy to shun the red carpet.
Yes, she did not use the word 'shun', in her words, she 'missed' it.

But why and how would Mercy miss an event of this magnitude.
Several opinions have surfaced following her big miss.
Some think she was intimidated by the first looks she saw on the red carpet and smartly stayed back knowing her outfit would not meet and beat the standard.
Others believe, her stylist and designer disappointed her at the eleventh hour. That's sad.
Meanwhile, others believe she missed it because she didn't get a nomination.
Well, since she gave no reasons for missing, we could be forced to believe that one of these opinions is the fact!
Meanwhile, Toyin Abraham slayed in her behalf...
La'bos
- March 04, 2017
Email ThisBlogThis!Share to TwitterShare to FacebookShare to Pinterest