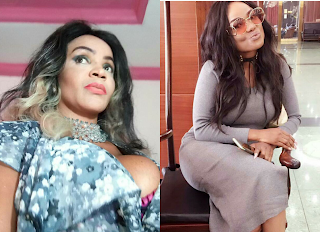 Just when we were praying and hoping to hear the last of sex scandals especially in the Nollywood industry and between men of God, actress and musician Cossy Orjiakor has opened new cans of worms for all to see.


Following the mention of Daniella Okeke in the Apostle Suleman scandal, Cossy Orjiakor began a story on her page titled The Ungrateful Delilah, the story which began a couple of days ago tells the story of how Cossy Orjiakor introduced some actress to a certain Mr. who had initially promised her a Range Rover.
According to Cossy, she did not get the Range because the new actress she introduced to Mr stole him from her.
In a new twist however, the busty Cossy dragged Iyabo Ojo into the scandal mentioning the recent case of the actress being involved with a Port Harcourt Pastor.
In Cossy's words, there is no flame without a fire she states revealing that millions flowed into Iyabo Ojo's account from this cleric.
Although Cossy did not out rightly mention Iyabo's name, she made it quite clear, calling her 'a fortified juju girl with an angelic face' she added that she acts Yoruba films and even wished her pretty daughter a happy Birthday to make it easy for us to know.
According to Cossy, she's outing Iyabo Ojo because she bad mouthed her to a certain Mr...
She also revealed she hooked her up with the person who changed her life!
"Enjoy your Range, enjoy your house, enjoy your blockbusters, but don't forget I hooked you up... "
Now we have to wait for the next part of this tale where Cossy would obviously unveil who Delilah really is.