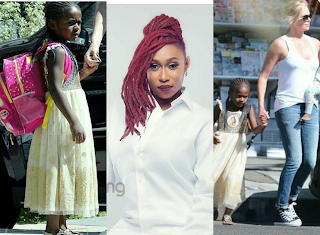 Nigeria dance hall queen Cynthia Morgan could barely hide her anger and grievance at Hollywood actress Charlize Theron as the latter proceeds on what Cynthia calls the dehumanization of the black race.


Charlize Theron who recently adopted a five year old South African boy is doing all in her power to make the boy look like a girl, and she goes as far as dressing him up in girl's frocks.
She probably wanted a girl and she got a boy, but according to Cynthia Morgan, this is no reason to dehumanize the young boy by leading him on a path that might not be his.

The singer is particularly enraged that the young boy subjected to this act is an African, which is like a direct slap on the faces of Africans.
"Take him back to where you got him and stop subjecting him to this, you should help him make right decisions not lead him to wrong ones" Cynthia said.
She also thinks Charlize should be sued if she does not stop this.
Cynthia's anger came from a viral photo of Charlize with the boy in LA dressed up like a girl.
La'bos
- March 30, 2017
Email ThisBlogThis!Share to TwitterShare to FacebookShare to Pinterest