Davido Allegedly Had His First Child At Age 20, Reports And Photos Surface. 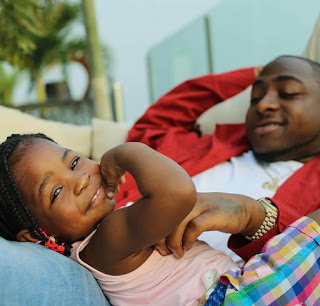 According to reports that are bound to go viral in the blink of an eye, our dear David Adeleke, Davido had his first offspring in the year 2013 when he was merely a twenty year old star.

The singer who has his supposedly first child later in 2015 had successfully kept this from public eye as he shut the lady and her daughter out of his life even though he heard of the child's birth.
According to an anonymous source who tripped a particular reporter, the singer and his father were contacted about the baby and a DNA was carried out, a result that proved Davido was not the father, the family of the girl suspected foul play because of the special hospital used and the time it took to release the result.

The news will hit Punch tomorrow according to the source, but all correspondence was releases including the photo of the girl who looks like Imade.
If these reports are true, then Davido is on his way to breaking the record of the artiste with numerous baby mamas considering that another is on the way. This might be the reason this story is coming out now...Davido showers so much love on Imade, confirms he has another on the way, leaving the Ibadan babe and her child.
This could be the reasons for the expose!
La'bos
- March 17, 2017
Email ThisBlogThis!Share to TwitterShare to FacebookShare to Pinterest