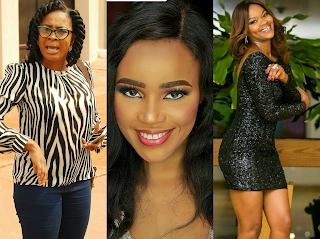 Reports of another husband snatching scandal has just reached us from Nollywood actress and movie producer Bose Alao Omotoyosi.


Bose Alao is married to a Ghana based football star Omotoyosi Rasak. In a show of love yesterday, Bose posted a photo of herself loved up with her husband, her MCM, only for someone to send her DMs calling her a fool for being friends with Bidemi Kosoko who allegedly was sleeping with her husband.

According to the message, Bidemi lives in an apartment rented by Bose Alao's husband.
While lamenting that the issue was getting out of hand, Bose also mentioned that a similar drama had happened with actress Kehinde Bankole...

It was further revealed that Bose Alao and Kehinde Bankole used to be great friends until recently, many would conclude that their relationship collapsed because of the mess.
Although some colleagues have tried to caution Alao who has shared all the messages from her DM publicly on her page, the actress has refused to delete the post and even tagged her husband Rasaq.

Secrets and scandals have continued to evolve and names are being drawn into the mess.
Bidemi Kosoko is one of the acting daughters of Jide Kosoko while Kehinde Bankole is an award winning and very talented nollywood actress.
Actress Toyin Abraham in an attempt at peacemaking has continuously sent direct messages to Bose Alao, and implored her to read them. Obviously, the actress would try to urge her colleague to be calm lest the matter is blown out of proportion.

From all indications however, Bose Alao definitely wants to blow the matter...
- March 21, 2017
Email ThisBlogThis!Share to TwitterShare to FacebookShare to Pinterest