I Left My Family To Follow Baba Suwe - Yomi Fabiyi 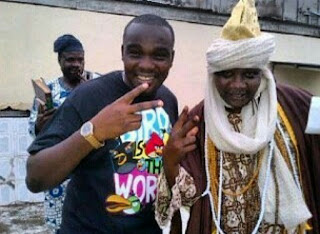 
Yomi Fabiyi reveals how he was star struck the first time he met the actor comedian fifteen years ago. According to Fabiyi, Baba Suwe could see the excitement in his eyes and gestures.
"He could see on my face that I wanted to be a part of the team."
Yomi recounts how the veteran actor agreed to mentor him. "He told me to go home and tell my parents that I now work for Baba Suwe but I told him it was not necessary" He said.

Yomi Fabiyi said he did not bother to go home as he was scared Baba Suwe would change his mind. He became Baba Suwe's PA and got the needed training to be the thespian he is today.
Without Baba Suwe, there will be no Yomi Fabiyi. He said.
La'bos
- March 30, 2017
Email ThisBlogThis!Share to TwitterShare to FacebookShare to Pinterest