It's The Fifth Edition Of AMVCA Tomorrow, Who Are You Eager To See On The Red Carpet? 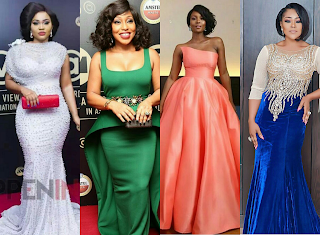 It's exactly twelve months since the Africa Magic Viewers Choice Awards AMVCA had it's 4th edition, meaning that it's time for the fifth edition of one of the most anticipated award nights in the Africa movie industry.

Last year's event was full of pleasant surprises especially as regards fashion trends and the carpet struts!
It almost seemed like the celebs could care less about the essence of the award which ultimately was the 'plaque', rather, they came to slay and to murder the red carpet.
Some looks are still etched in memory no matter how hard we try to erase them. Some celebs outdid themselves last year with looks straight out of Hollywood.
Celebrity stylists are already sweating it out in their offices to make their clients the Belle of the ball.
Nollywood and Ghollywood stars are already hinting at colours of their outfits leaving our mouths watering in eager anticipation.
Well, we had some really amazing looks last year and we are so sure this year would be more than just amazing.
But wait, who are you dying to see on the red carpet tomorrow?
La'bos
- March 03, 2017
Email ThisBlogThis!Share to TwitterShare to FacebookShare to Pinterest