Kemi Olunloyo To Remain In Port Harcourt Prison Till Further Notice, Says She Won't Use Her Powerful Connections. 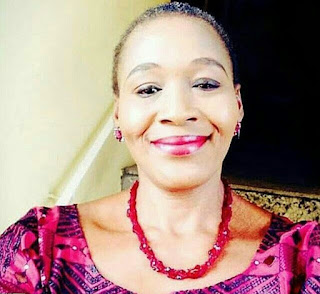 News of Kemi Omololu Olunloyo's arrest hit the social media after she was able to share the news prior to her being whisked away by the Nigeria Police Force from her home in Ibadan.


Since the incidence happened on Tuesday, nothing was heard of the journalist until she shared the latest information on her page a while ago.
Apparently, Kemi Olunloyo was whisked to Port Harcourt from Ibadan despite the Police telling her it wasn't a criminal offence that prompted the invitation.
According to Kemi who had access to her phone today, she us being remanded in Port Harcourt prison for defamation of character and it involves a certain pastor in Port Harcourt which she wrote about.
The 52 year old blogger is being held with another blogger who reposted the story, she has been denied bailed and charged to appear in court on March 23rd, meaning she is to remain in the prison till then.
"I am in high spirits " she says. She also said it would be useless to use her very powerful connections and she has resolved to let the law take its cause.
Note that Olunloyo's father was a governor in Oyo State and is still quite powerful.
Read her full account here! Straight from the horse's mouth.