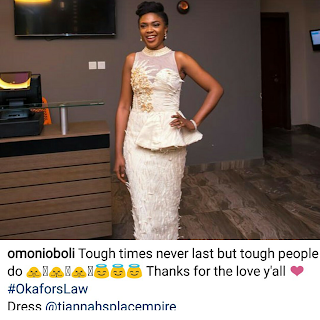 It came as a shock last night when we heard rather crudely that the premiere we had dressed all up for: Okafor's Law would not be showing after all.
The movie which had been in the works for several months is one of the most anticipated movies in the industry, producer by Omoni Oboli and featuring several nollywood bigwigs, the premiere slated for yesterday was definitely anticipated.


Only for the shocking court injunction to be passed out on the D-day after the hard work of the cast and crew was about to pay off.
According to Omoni, the accusations were that the movie was not hers, not written by her but someone else, meaning she 'stole' the script.
A teary Omoni had sworn on her life that she owns the movie, not partially but wholly.
Meanwhile, according to the complainant , one Jude Idala, Omoni had stolen his intellectual property... The agreement was to pay him 750K for the story only for Omoni to renege.
Despite the great disappointment, the actress had fun with friends who stood by her and there was an after party where they lightened up the gloom.

Omoni Oboli definitely will fight for her movie, she says "Tough times never last but tough people do "
Of course she is one tough cookie and we can be sure that we have not seen the last of Okafor's Law.
La'bos
- March 25, 2017
Email ThisBlogThis!Share to TwitterShare to FacebookShare to Pinterest