One Year After, Olajumoke Orisaguna Dazzles In A World Formerly Alien To Her... 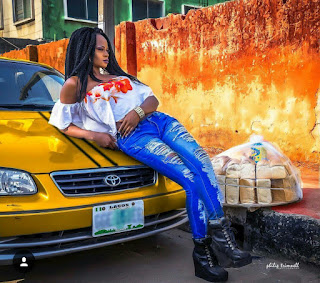 The name Olajumoke Orisaguna became a household name around this time last year when an ordinary bread seller from Osun state photo bombed an international act and found her way into TY Bello's lens.

The rest is history as they say. Olajumoke was re-branded and picked off the street to start a new life that does not involve bread hawking.

She was introduced to a world alien to her, the world of modelling, totally different from what she was used to.
Today Olajumoke Orisaguna is no longer a bread seller crashing with several other bread sellers at Liberty Bakery on Commercial Avenue, Sabo, Yaba , Lagos. She has been featured on all the important magazines both online and otherwise, locally and internationally.
Yes the world is alien to her, but this lady has been able to stay, live and grow... It's her one year anniversary as a non bread seller.

Give it up for Olajumoke Orisaguna former bread hawker.
La'bos
- March 17, 2017
Email ThisBlogThis!Share to TwitterShare to FacebookShare to Pinterest