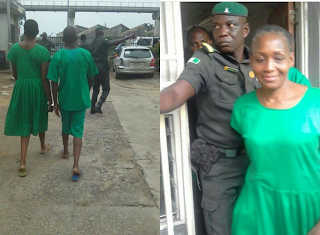 This is becoming more serious than we thought, there were imaginations in the head of many as they wondered if the controversial blogger was enjoying in detention or wearing her own clothes, now the imaginations have been put to rest at the journalist was pictured today in her prison wears.


Omololu who was picked up from her home in Ibadan on March 14 faces charges of defamation of character. The charges came weeks after her post about a Port Harcourt based pastor Pastor David Ibiyemie and Nollywood actress Iyabo Ojo.

Her bail hearing was initially slated for March 23rd last week but could not hold because of the magistrates absence.
Kemi was led out today in cuffs and the green prison frocks ,smiling in the face if trouble. She already sent the message that she is in high spirits.
- March 30, 2017
Email ThisBlogThis!Share to TwitterShare to FacebookShare to Pinterest