Pretty Mike, Uche Maduagwu and Bobrisky, Whose Style of Publicity Annoys You More? 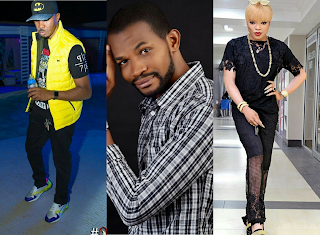 The social media has become a market place with everyone buying and selling a particular product or service. To make their 'products' popular, publicity has become a very necessary tool in the hands of social media users,some would go to extreme lengths to achieve their aim.


While many actually have services to sell or advertise, others just want to be known, and they will stop at nothing to appear on all blogs even if it's for negativity.
Three most notorious attention seekers on the internet see Bobrisky, Pretty Mike and Uche Maduagwu.
These three grown men have taken their quest for fame and recognition to a level that surpasses the understanding of even the smartest.
You can't help but wonder why a man like Bobrisky would go all out to look like a woman, talk like a woman and give the impression that he is gay. All for publicity!  Just to put his name on the lips of everyone. We can't deny that he is succeeding. Many would swear that his style of attention seeking makes them want to puke. Yet he has followers.

From nowhere, a self acclaimed actor appeared on our timeline and proclaims that he is the king of Nollywood. All the superstars are his friends. Every top actress wants to sleep with him.
He is notorious for saying things that make you want to hit your head against the wall in anger. A lot of people think he is insane, but the truth is : he is only seeking attention. We must admit that his style of publicity is quite annoying!

Pretty Mike even has a thriving business, a club based in Lagos, yet he still seeks recognition. From chaining girls, to carrying umbrellas here and there.
Now he goes about drinking from feeding bottles!  All for publicity... How desperate can one get for fame.

These three are the most notorious attention seekers we have around. Who pisses you off more?
La'bos
- March 23, 2017
Email ThisBlogThis!Share to TwitterShare to FacebookShare to Pinterest