Revealed! Why Wizkid And Davido Never Released The Collabo They Promised 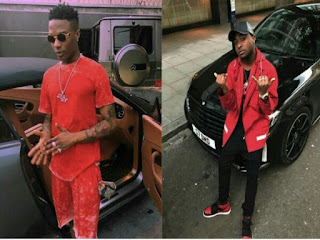 Despite the facade of camaraderie and friendship displayed in recent times by Nigeria super star singers Wizkid Ayo Balogun and David Adeleke Davido  we recall that the collaboration they promised us about two years ago has not been delivered.

Many times we have wondered how difficult producing a collabo can be but now the reason for the delay has been made obvious.
Apparently, the territorial dispute between these two talented young acts was never over, their fans have this clear to us today by stirring up the battle all over again.
Davido had posted on his Instagram handle this morning that his latest track IF was booming, only for a Wizkid fan to bash the HKN gang that Wizkid remains the best singer of the two. Davido was called a kid and Wizkid a king!
Although Davido replied that he was satisfied with his African Music, the WIZKIDNEWS page on Instagram released some images of music charts with the caption "The numbers don't lie" without doubt, this is a direct attack at Davido whose name did not appear on both charts.

From all indications, a collabo from these two might not happen now...
La'bos
- March 10, 2017
Email ThisBlogThis!Share to TwitterShare to FacebookShare to Pinterest