Why I Chose To Marry You - Daniel Ademinokan Reminds Stella Damasus 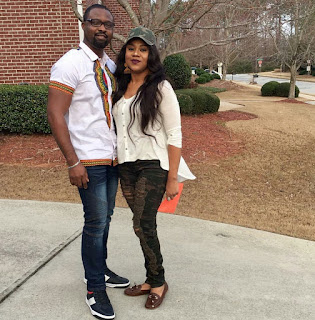 The world may hate them, the media might continue to bash them but Daniel Ademinokan and his wife Stella Damasus are not giving up on their love!

The circumstances of their marriage caused many to frown and even caused a rift between Stella and many other actresses who accused her of "snatching" their colleagues husband.

Note that Daniel was once married to actress Doris Simeon and they had a son David before the split.
Now Daniel is saying he did not marry Stella must because he could of got the fun of it. He took time to remind her and also inform us that he 'chose' to marry her.

The movie maker spelt out the reasons why he chose her over all others, well, over Doris Simeon!
According to Daniel, who wouldn't choose a hot lady like Stella? Asides being a hottie, Daniel says his wife is smart and super intelligent.

"They can always try to tear you down, but as usual, they will always fail... " he said referring to trolls and haters Who wouldn't leave Stella alone even after many years.
Many prophesied doom into their union, but they have shocked us, first by relocating, secondly being together still.

- March 14, 2017
Email ThisBlogThis!Share to TwitterShare to FacebookShare to Pinterest