Why Mental Issues Must Be Taken Seriously In Nigeria... Man Butchers Mother For Not Giving Him Food. 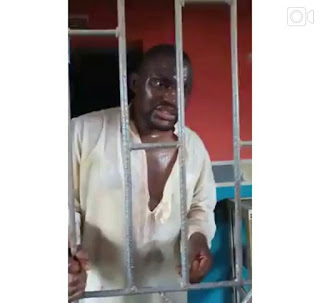 Nigeria is one country where mental illness is not considered a thing, until a person is seen naked on the street or striped with chords into a mental facility.

The perception of Nigerians is that a mentally challenged person is one who laughs when others are crying, or one who eats from the dung site.
However, mental illness abound everywhere leading to crimes that finally open our eyes and minds to what we have hitherto avoided or ignored.
A man who was perceived to be of a sound mind killed his mother in a way that depicts insanity yesterday in Ogun state. What was his mother's crime? She failed to give him breakfast and even insulted him.
Crimes like these abound, but after seeing the corpse of the slain woman, it could only have been done by a mentally challenged person.

Listening to this suspect talk, you would not even thing of insanity.
Mentally sick people are everywhere, looking fine, dressing well and talking smartly until something triggers their insanity.
The man who killed his mother, if someone like him successfully woos a woman and marries, he could kill his child for defecating on the chair or kill his wife for over salting the food.
This is because Nigerians do not pay attention to mental illness. It is deadly, very deadly in fact. The signs are always there... A mentally challenged person will always give clues as to his state of health.
If Nigeria pays more attention to mental and psychiatric issues, no doubt, the rate of alarming and shocking crimes will reduce drastically in the country.
Pay attention to that woman who looks gorgeous but wouldn't stop laughing in church, call attention to that man who keeps talking and laughing to himself during a serious meeting at work.
Little things will give us the clue that a certain person needs care...
La'bos
- March 13, 2017
Email ThisBlogThis!Share to TwitterShare to FacebookShare to Pinterest