You Probably Missed It, But Dino Melaye Is Now The King Of Comedy 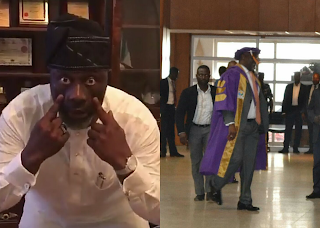 Dino Melaye is doing all in his power to shame his number one critic Omoyele Sowore the publisher of Sahara Reporters even if it means appearing a bit dramatic and childish in the process.


Following the news from SR that the Senator has no degree from all the institutions he claimed to have graduated from, the distinguished Senator began moves to prove to the world that he indeed has seven degrees and is presently pursuing the eighth one.
Now that Dino Melaye seems to have proved that he indeed graduated from Ahmadu Bello University and even served his fatherland sixteen years ago, he has resorted to acting funny on the social media.

Yesterday, the vehicle freaked Senator posted a video of himself dancing in mockery of Omoyele Sowore with a Yoruba abusive song. The video went viral on all comic channels in less than an hour and we thought we had seen the end of that drama. only for Dino Melaye to appear today in an academic gown.

The Senator appeared for a plenary session today dressed in an academic gown and cap.
The drama definitely is not over for even though Melaye has filed a petition against Sowore to the IG of police and the DSS, the publisher maintains he is ready to die while exposing Dino Melaye.

La'bos
- March 28, 2017
Email ThisBlogThis!Share to TwitterShare to FacebookShare to Pinterest